A History of Water and Humankind

In Elixir, New York Times bestselling author Brian Fagan tells the story of our most vital resource and how it has shaped our history, from ancient Mesopotamia to the parched present of the Sunbelt. 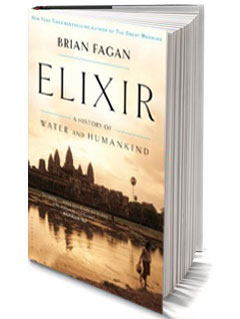 Fagan relates how every human society has been shaped by its relationship to our most essential resource. This sweeping narrative moves across the world, from ancient Greece and Rome, whose mighty aqueducts still supply modern cities, to China, where emperors marshaled armies of laborers in a centuries-long struggle to tame powerful rivers. As the earth’s population approaches nine billion and ancient aquifers run dry, we once again remember the importance of this vital resource. To solve the water crises of the future, we may need to adapt the water ethos of our ancestors, captured here in rich detail by Brian Fagan.

Brian Fagan was born in England and studied archaeology at Pembroke College, Cambridge. He was Keeper of Prehistory at the Livingstone Museum, Zambia, from 1959-1965. During six years in Zambia and one in East Africa, he was deeply involved in fieldwork on multidisciplinary African history and in monuments conservation. He came to the United States in 1966 and was Professor of Anthropology at the University of California, Santa Barbara, from 1967 to 2004, when he became Emeritus.

Since coming to Santa Barbara, Brian has specialized in communicating archaeology to general audiences through lecturing, writing, and other media. He is regarded as one of the world’s leading archaeological and historical writers and is widely respected popular lecturer about the past. His many books include three volumes for the National Geographic Society, including the bestselling Adventure of Archaeology. Other works include The Rape of the Nile, a classic history of archaeologists and tourists along the Nile, and four books on ancient climate change and human societies, Floods, Famines, and Emperors (on El Niños), The Little Ice Age, and The Long Summer, an account of warming and humanity since the Great Ice Age. His most recent climatic work describes the Medieval Warm Period: The Great Warming: Climate Change and the Rise and Fall of Civilizations. His other books include Chaco Canyon: Archaeologists Explore the Lives of an Ancient Society and Fish on Friday: Feasting, Fasting, and the Discovery of the New World and Cro-Magnon: How the Ice Age gave birth to the First Modern Humans. His recently published Elixir: A History of Water and Humankind extends his climatic research to the most vital of all resources for humanity.

Brian has been sailing since he was eight years old and learnt his cruising in the English Channel and North Sea. He has sailed thousands of miles in European waters, across the Atlantic, and in the Pacific. He is author of the Cruising Guide to Central and Southern California, which has been a widely used set of sailing directions since 1979. An ardent bicyclist, he lives in Santa Barbara with his life Lesley and daughter Ana.

Using information about our material, container, and purpose, Dynamix continually chooses a mount, drive, and impeller that are appropriate for the job with friendliness and ease, even after changes are made many times to our plans and purpose.