Dynamix is often called on for its process experience in many industries because the mixer is at the heart of these processes.  DAF systems are used across many industries with many unique requirements which Dynamix is familiar with.

There really isn’t a one size fits all or a configuration template that works for all processes when it comes to DAF systems.

Coagulation and flocculation of wastewater.

Complete DAF systems generally involve a combination of the following process stages that may or may not include more than one tank per stage. 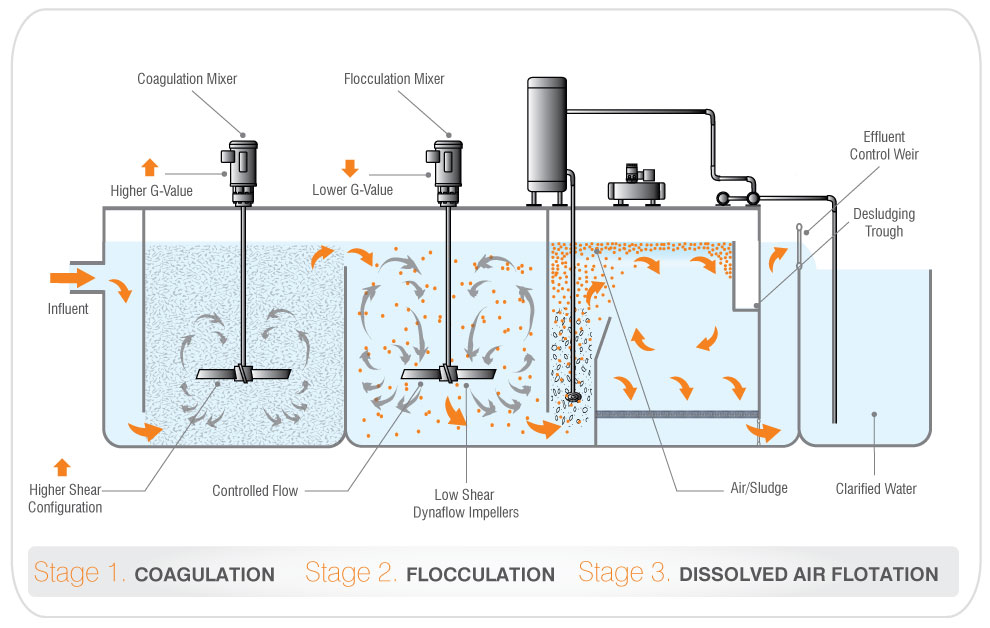 Proper industrial mixer application requires both knowledgeable personnel and an ability to design the equipment for the process. This resulting mixing solution plays a large role in the quality of the entire Water Treatment Train both the larger process and the DAF section. Generally speaking, factors such as proper chemical emulsion, molecular reactions and sufficient detention times in correlation to chemical dosage and ultimately proper removal of TSS, BOD and FOG. Both processes require a delicate approach to mixer design calculations. For instance, in flash mixing shorter mixing times have a profound influence on the effectiveness during the destabilization process – flocs are dependent on applied rapid shear conditions as longer exposure to high shear deteriorates the bonding strength between primary particles and reduces collision efficiency for small flocs causing a lower Flocculation Index (FI) value. 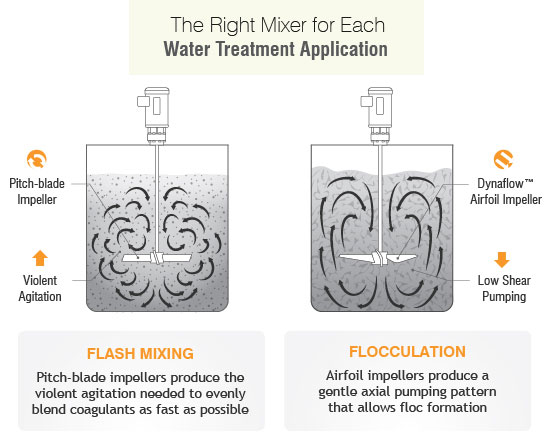 Flash Mixing becomes more fundamental where highly turbid raw wastewater contains higher particle collision-rates due to the high concentration of particles – rapid mixing increases adsorption and floc formation time due to the fast interactions thus increasing the FI values with shorter fast mixing times. While mixing, the coagulant should be dispersed at a given mixing intensity between G-Value of 400 to 800 sec-1. DAF systems are reliant on Flash Mixing efficiencies so it is important to avoid oversizing which may lead to excessive energy consumption, over-shearing, and higher capital expenditures. Insufficient mixing with poorly designed industrial mixers may necessitate the addition of excessive coagulants which adds to chemical cost and poor operational performance of the DAF system.

Flocculation mixing tanks should be equipped with slow/ gentle mixing process in which particles are brought into contact in order to promote their agglomeration and proper floc formation through gradual distribution. There is no control or capability to change shear rate once the mixing energy is set by the design of the unit because pressure drop is a limiting performance factor in mixing. Therefore, using industrial mixers equipped with variable speed control options and low shear impeller blades are recommended to avoid floc damage while the slower speeds provide longer retention times to ensure affluent characteristics are properly changed within the 30-60 minutes. 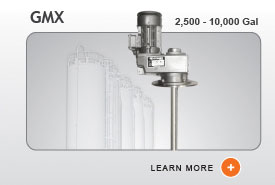 The Dynamix GMX and NMX Series both industrial mixers designed for wastewater treatment processes and offer fixed or split hub, Pitch/ 3PB or Dynaflow impellers calculated with precise consideration to tank diameter, geometry and/or lack or inclusion of baffles. Motor options range between 0.5 to 300 HP and VFD units offer the lowest gear reduction ratios in the industry. If you are interested in learning more about mixing solutions for DAF system applications or if you have challenges in other stages, post a comment below or email us at [email protected]

See our Blogs on Lime Slurry, Denitrification …What else are you interested in reading about? For more information on all Dynamix mixer lines, visit our Product page.

Dynamix offers a good price, great support, and excellent service. The DMX 5000 Series mixers perform well and are easy to install and maintain.