Apart from the actual mixer, the design of the mixing tank is the single most important factor in producing a successful result in any process. 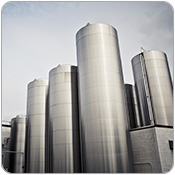 In order to allow optimal performance from a mixer’s impeller, it is essential to create an environment that supports both correct impeller positioning and appropriate liquid coverage of the impeller. Incorrect positioning negatively affects the performance of a mixer, the quality of a product, and may even be detrimental to the performance life of the mixer drive.

When looking at tank designs, vertical cylindrical, and square or rectangular tanks are most common.

In the process of selecting the optimal tank design for an application there are certain rules of thumb to observe.

For most mixing applications the ideal liquid level to tank diameter ratio is 0.8, however, any ratio that is close to 1-to-1 is sufficient.

A ratio that is too small does not allow proper axial mixing in the tank. Anything less than a 0.6 ratio should be avoided.

When the ratio is in excess of 1.4, dual impellers should be employed.

Any time that the liquid level to tank diameter ratio exceeds 2.0 the tank selection should be re-evaluated, as these slim tanks are not the most cost-effective solutions for mixing.

As the mixer shaft length extends, so does the price of the mixer. For example, if we take a typical 5,000-gallon tank based on the ideal scenario and the slim tank scenario, the following will occur:

As you can see from the table above the typical mixer price almost doubles. 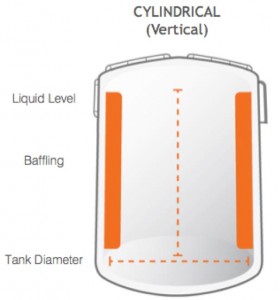 Vertical cylindrical tanks are the most common type of tank in use.

A key consideration for cylindrical tanks is to ensure that they are either baffled or offset-mounted to prevent swirling from occurring.  Refer to section 2 below (“The Use of Baffling”) for details.

Generally baffles are not required for smaller tanks (<5,000 gallons in volume or <10’ height). However, for larger tanks, it is much more cost effective to install baffles than to invest in a more expensive, more heavy-duty mixer that is offset-mounted. 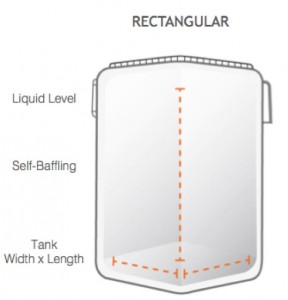 Rectangular tanks have an equivalent diameter that can be calculated by taking the square root of Length x Width and multiplying it by 1.13.

Rectangular tanks can be effective when used for blending, as these tanks are self-baffling.

However, rectangular tanks are not recommended for solid suspension because packets of solids will form in the corners.

These “dead spots” will occur in a tank with corners. Therefore, a greater level of mixing is required than is needed in a cylindrical tank of equal size to achieve a similar result.

Cone or Round Bottom Tanks

Some tanks will have a round (dish) or cone bottom.  Below are some standard guidelines about approaching mixing for these tanks.

2. The Use of Baffling

Rectangular tanks are self-baffling, so the use of baffles is a requirement when using cylindrical tanks only.

If an agitator is center-mounted in an un-baffled cylindrical tank, it produces a swirling motion, which is very inefficient.  As an example, imagine two particles swirling in a circular motion, they will always be chasing each other and will not mix.

There are two solutions to consider:

Baffles should fully extend the length of the tank, leaving some space at the bottom to avoid the build-up of solids. Therefore, the configuration for a 12’ diameter tank would be 1’ wide baffles mounted 2” off the tank wall.

For more detailed information on the use of baffles and optimal arrangements, see our article Mixing 101: Baffled by Baffles

It was great finding a person behind the company phone that can assist the client’s needs and requirements. Having as a final result – the client achieving the scope in a timely manner.